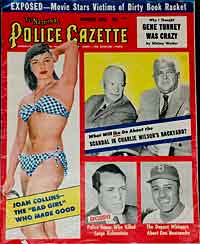 When it comes to hyped up bullshit, the National Police Gazette is the old standard. Started in 1845, ostensibly as a record of police exploits, it paved the way for contemporary rags with lurid headlines, gossip and violence. It glorified boxers and transformed prizefighting from illegal bouts confined to off shore barges, into legitimate sport.

Like most jokes, there is a punchline here, ....  if you thumb to page 27 you will find an ad for those "Illustrated Cartoon Booklets so full of fun and entertainment

How MOVIE STARS are Used in Obscene Booklet Racket!

The balding, middle-aged prisoner sat on the edge of his cell bunk, hunched over a pad of paper on which he scribbled industriously.

"Dear Clarence," he wrote. "Ed has some jewelry for you to pick up. john owes $60 for wrist watches. Peter wants to buy $100 worth of rings. Albert will deliver $200 worth of pearl necklaces ..."

Other prisoners in the Pittsburgh jail day dreamed, pored over tattered comic books, sang the sad jailhouse songs. But Louis Stevens Saxton wrote page after page of instructions to his colleagues in the "jewelry business" he operated from his dingy cell.

It was hard to believe that this quiet, industrious man was serving a three-year sentence for possession of obscene booklets and photo graphs. Some of his fellow prisoners were sure he'd gotten a bum rap. But Louis Saxton never complained. He spent all his spare time with his pad of letter-paper, writing instructions to buy, to pick up, to sell various items of "jewelry." 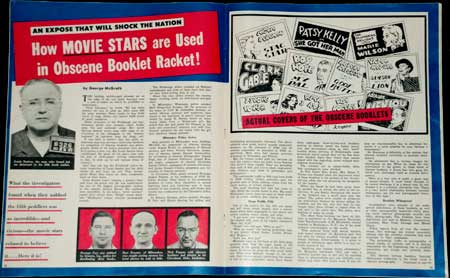 The Police Gazette was a tabloid sized magazine

And then one day the Pittsburgh police became suspicious of Louis Saxton and the daily letters he sent from his cell. They investigated. What they found set them completely back on their heels.

Louis Saxton wasn't running a jewelry business from his prison cell. He was masterminding one of the biggest pornographic rackets in the eastern United States. His methods were incredible. In his letters, "wrist watches" meant dirty movie films. "Rings" meant booklets. "Necklaces"' meant obscene phonograph records.


The Pittsburgh police rounded up 'Saxton's confederates and most of them have now joined their letter-writing boss in jail.

About this time police around the country began cracking down on distributors and peddlers. 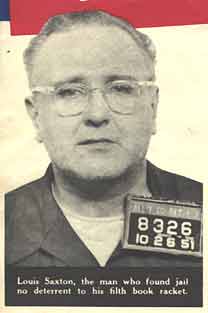 What the Investigators
found when they nabbed
the filth peddlers was
so incredible-- and
vicious--the movie stars
refused to believe
it, ... Here it is!

In Cleveland, Ohio, police arrested Nicholas Angelo Pappas, at his bookstore at 4706 St. Claire Avenue. They found in his Possession booklets of comic strip characters in scenes depicting lewd and lascivious acts. A large quantity of_ this material, along with books and movies was confiscated by the Cleveland police officers.

In Atlanta, Georgia, police arrested Wyman H. Parr and Simon Simring for selling and distributing pornographic literature. The above subjects were given twelve months suspended sentence on the payment of $500 and 36 months suspended on payment of $300, respectively. Both men had similar previous sentences in Tennessee and Florida.

But the vicious racket goes on-·-----because all over the country there are other Louis Saxtons who haven't been caught. They are spreading their web of filth and evil to snare impressionable children into lives of perversion and delinquency.

The nationwide traffic in filth runs from $100 to $300 million dollars annually--and the greatest part of those millions comes from the lunch money of school children! The most shocking fact that has come to light about the vicious racket is this: Big name Hollywood movie stars are used in these booklets to entice children into buying it!

One of the outlets for this filth are candy and soft drink shops, usually near a school-house where kids congregate, to buy penny and nickel candies, comic books, and soda.

"I got some new books in," the man behind it the counter tells some of his regular customers.
"Real hot stuff."
"Yeh?" one kid says. "Who ya got?"
"Who ya want?" the leering proprietor says.
"I got plenty--Clark Gable, Tyrone Power, Roy Rogers----"
"Let's see, let's see!"

Moments later, in the back of the little shop, quarters pass from the eager hands of the children to the greedy hands of the filth merchant. In return he gives the kids small book lets. They look innocent enough on the outside, their covers merely mentioning the names of one or more prominent movie stars. Inside, these eight-page, three-by-four-inch booklets portray in obscene detail the basest sexual acts and perversions--using as their "stars" crudely drawn pictures of Hollywood's most prominent movie names! And all the film stars were shocked when they found their names linked with this degrading racket without their slightest knowledge.


The contents are so indescribably filthy that investigators were shocked. In Fair Lawn, New Jersey, Mrs. Helen C. Thorns was stunned when she discovered some of these booklets in the pockets of her 13-year- old son, while she was preparing his dungarees for the laundry.

When she found he had been given them by another boy at school, she went to the authorities. It was finally discovered the source of the booklets was a small store near the school. The police were unable to prosecute the store-owner because he denied selling the booklets, and the boy who first said he had bought them there refused to repeat what he had said to the man's face. The police were helpless to make an arrest.

The effect these booklets can have on children is explained by Dr. Benjamin Karpman, Chief Psychotherapist of St. Elizabeth's mental hospital in Washington, D. C., one of the most eminent criminologists in the world.


people of adolescent ages, which is a very unstable period of life.

"Anything may happen during adolescence," Dr. Karpman continued. "You can take a perfectly healthy boy or girl and by exposing them to abnormalities you can virtually crystallize and settle their entire lives. If you expose an impressionable boy to abnormal behavior it is quite possible he may become a homosexual".


Dr. Karpman is definitely of the opinion that obscene booklets contribute to juvenile delinquency.


"An adolescent boy is curious, hungry for information on sex. When he looks for this information in the gutter, in these kinds of obscene booklets, it draws him into gang life, which later discharges itself as juvenile delinquency.

"Here is a boy who is under a great deal of sexual tension. It must break through. If he cannot discharge it in a sexual way, he discharges it in a criminal, anti-social way. There is a very direct relationship between juvenile delinquency, sex life and pornographic literature of this type."

Investigators were amazed at the widespread distribution of these booklets, as well as other pornographic materials - dirty playing cards, obscene phonograph records and filthy photographs. The booklets have been distributed and sold in Missouri, Connecticut, Louisiana, New York, Chicago and Rhode Island.

Police reports from all over the country reveal that teen-age sex crimes invariably showed that the youthful criminals had such materials in their possession.

The nationwide traffic in pornography is aimed chiefly at children, and it is directly, responsible for the frightening rise in youthful perversion, sex crimes and juvenile delinquency.

The obscene cartoon booklets "starring" Hollywood celebrities is the latest craze in obscene pornography. (Continued on page 30)
The evil results of using big movie names in such filth is explained by a prominent New York psychiatrist.

"Even though the drawings are poor," he says, "to the immature child's mind the acts portrayed in
these booklets are directly associated with the celebrities named. When the most foul perversions are shown, the child automatically associates these acts with the actual star he sees on his neighborhood movie screen.

"This begins a train of thought in the child's mind: 'If s-and-so (a movie star) does things like that,why shouldn't I?' It is without doubt the most vicious and depraved attack on youthful minds that I have ever known!"

Equally vicious, but not so widely distributed, are the phonograph records and wire recordings purportedly between two well-known movie stars. Supposedly made from "hidden microphone recordings" these salacious records are dialogues of obscene conversation between per-
sons imitating the voices of famous Hollywood stars.What can be done to stop this traffic? _ First there must be more vigilance by local police.

If the police of a community crack down they can reach the small-time peddler.

Second, local sentences for possessing and peddling this filth must be made heavier.

Today- the lines constitute little more than a "license fee' for purveyors of the filth.

Third-and by far the most important-is that the Federal government must put teeth in its present laws.

Today Federal statutes prohibit the interstate shipment of obscene materials by common carrier or
through the mails. But it is not unlawful to transport pornographic materials by private car or by truck.

It is this loophole in the Federal law that permits the interstate traffic in filth that is undermining the morals of American children.

Only the public can bring pressure on local and Federal governments to enact laws that will drive the filth peddlers out of business.

Then, and only then, can we put a roadblock in the way of the trucks and private cars that roll through the night loaded down with the filth and obscenity, sapping the moral fiber of the Nation's youth.