Collecting Vintage Tijuana Bibles is fraught with danger! Not from seedy underworld types, but from unknowledgeable and even conveniently ignorant sellers, who proclaim their fourth or fifth generation reprint as "an original ", with total confidence. As collectors, we all "pay our dues" to gain experience and knowledge, though that doesn't make getting burned less painful.

Just the other day, I searched Amazon's used, and found one "authoritative" dealer in rarities offering vintage tijuana bibles commonly see in the $10. to $15. range for $78. BTW, that doesn't mean some eight pagers aren't valuable ... just not these!

The first thing to understand is 98% to 99% of all Eight Pagers offered are reprints. That's right, I'm not kidding ... though that doesn't mean they are all crap. There are good and bad, both early and late, it's a matter of knowing what you are looking for ... that's why experience is #1. The more books you handle, the more you learn. As a collector, I'm looking for what I consider quality books, the image itself being the most important, the materials and condition follow.

An original printing, Dick Tracy and the Koh-IHur Emerald is difficult to find in any condition. This artist produced only a handful of comics, which may not have been distributed well, as they show up in few reprint lines.

Though millions of these little comics were produced in the 1930's, only a relatively small number survived. Most of the eight pagers that turn up today are of postwar origin, their vintage should be obvious to a paper collector.

The second thing to understand about Vintage Tijuana Bibles, is nothing is written in stone, no matter what your preconceptions, there are always exceptions to the rules.

The best of the eight pagers were printed on cheap paper, the worst .... on whatever trash available, including used shipping tags and the blank pages from books. The classic 8 pager comic is eight single pages, a wrap around cover and staple through the front. Some covers are split, so they are spineless, some books are saddle stitched with printing on either side of the pages. Beyond that, how good the paper is, the quality of the printing, and the dirty comic book's possible vintage & actual rarity, are all somewhat subjective judgments that determine it's value to the buyer.

Some of these Vintage Tijuana Bibles can be dated by character appearance, style & storyline, which dates the entire set it is attributed to.

Popeye and the Jeep, A Favorite eight pager in my Collection.

A good example of this is Eugene the Jeep in "Precaution" ( A particular favorite of mine), in E.C.Segar's popular comic strip, he emerges from his box on 4/1/36, and his magical abilities are revealed over the next month or so. The Flash Gordon & Jungle Jim in this 8-pager set also sync to their weekly newspaper counterparts. Queen Udina and Flash's Water World sequence end Oct. 11, which leads me to believe this series was drawn within this time frame, and on the streets soon after.

This Blondie eight pager was probably drawn from 1932 -1934.
This looks like a pretty early edition.

In the daily newspapers, the Jeep predicts Popeye's pappy is alive, and we begin the search for Poopdeck Pappy, who we don't actually see until the end of 1936. I believe, Poopdeck Pappy in "Bolls" and the rest of the "Horizontal Slash" series are released no later than very early 1937.

Many comics, go through their early formative years, as character design and or storyline develop into their final, well known forms. Blondie, who has remained the ageless housewife for over 50 years, first appeared as a gold digging flapper on September 17, 1930. Talk about a floozie, she dated Dagwood in the dailies and the diminutive Hiho in the Sunday funnies. Blondie married Dagwood in 1933, has kids in '34 and '41, and at some point, everyone stops aging, even the pups .... they've stayed that way ever since! I've seen 8 pagers reflecting the various stages of Blondie's development. 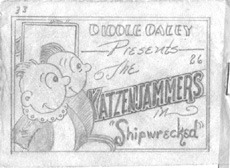 Tracings for several complete comics were discovered in an old New York print shop. These were obviously intended as source art for a line of reprints, the added numbering, giving us an idea of it's scope.
Mr Prolific was a master hand letterer. Though the example above looks pretty good, when compared with the real thing, it is downright crude.

While buyers of many types of collectibles highly prize mistakes for their rarity, in the world of Vintage Tijuana Bibles any and every type of production errors are the norm. Still, few of us can resist keeping a couple of oddball examples to show off. There are books with all kinds of cutting errors, extra pages, reused pages, and missing pages. If you can imagine it, it probably exists in these dirty comics.

After many generations of copying some of these eight pagers looked so crappy printers would crudely redraw or even trace the cover and often parts of the inside too.

A common technique of the printing trade is to"tighten up" re-photographed artwork by slightly reducing it's size. It's not unusual to find reprint lines combining multiple series all consistently shrunk to a uniform size.

As eight pager creators operated outside the law, libel was the least of their concern, and wouldn't hesitate to use celebrities real names, as often as humorous takeoffs.

In an additional effort to remain low key some publishers replaced the original drawn covers with text titles when reprinting. Although very early comics only had text covers these reprints shouldn't be confused for books of such rare vintage.

Have questions about collecting vintage Tijuana Bibles, or insights of your own to share?