In 1934 the double sized Tijuana Bibles appear. As large as two comics with 16, 24 and even 32 pages, the added space gave Mr. Prolific the opportunity to move his storytelling to the next level.

Popeye appeared in more of these than any other character & starred in "Popeye & Bolochy Bill" 16pgs, "Coozing Around the World with Popeye" 24pgs, "Popeye & Wimpy in Paris" 16pgs and "Mae West & Popeye" 16pgs.

It's worth noting that "Mae West & Popeye" is one of the few dated books (1935), and also has a revised edition featuring jokes written in the margins, led by important Tijuana Bible etiquette; " The Height of Stinginess - To Read one of These and Not Buy It!"..

Other 16 pagers give Betty Boop, Moon Mullins, Flash Gordon, Snuffy Smith, Boots, Burns & Allen, and other favorites, additional space for more complex story development. In "Around the World with Mae West", the saucy Broadway star tells us, the audience, of her search for a great lay, while the well known all star "Love Guide" was also "directed" by Mae. She also the starred in "The Hip Flipper" which originally had a cover price of $10.00

The 1940's, The War Years and Morale Building Cartoon Pornography

Whether or not Wesley Morse's 60 or so comics have all been released by 1940 is hard to say, they must have been big sellers and seem to have sparked more reprinting of earlier titles. I believe many of the books that turn up today are from this pre war period.

With the exception of a few odd propaganda Tijuana Bible comic books like "Hitler" & "Mussolini" they seem to be few new creative efforts until after the war, though cheap reprints of older 8 pagers still abound.

The Wartime paper shortage ended the era of the pulps, top magazines had their print runs cut, and 8 pagers were printed on anything available like used shipping tags and obsolete books.

The Tijuana Bible's finest moments were during the second World War, when thousands of American GI's carried these little pieces of home along with their personal mementos.

After the war, 8 pager production resumed but it would never be like the old days. As mainstream girlie mags became more provocative, the 8 pager lost much of it's titillation value and was relegated to "novelty item" status.

A New Generation of Artists

One artist, dubbed "Mr.Dyslexic", for mis-ordering the sequence of his pictures and word balloons, departed from the usual 8 pager fare and produced books that were as offbeat and twisted as his drawings were crude. A favorite, has Winston Churchill fathering a three headed baby with his own daughter. "Our Ma" is the dismal story of three girls working in their Mother's whore house.

Other series from the late 1940's include the "Rammit Home" books and the "Boarderless" series, which includes Superman, Zatara, Lil Abner and Terry & the Pirates.

Another artist appeared at the end of the 1940s who's modern style was a sharp contrast to Dyslexic and the others. His attempt at lighthearted books like "South Seas Suntan" meet with mixed success for me, however, his "Phone Booth Built for Two" is a clear cut Tijuana Bible masterpiece

Sex & violence in mainstream comic books reaches such an extreme, the US Congress steps in to curb them! Harvey Kurtzman's "Mad" elevates irreverent, rude, comic parody to virtuoso levels. You can actually see Mr. Prolific's influence in the work of young Bill Elder.

The 8 pager is still actively marketed, and becomes a border town standard which will forever brand them as "Tijuana Bibles". Sometimes in the late 1950's the "Barber Pole" series is released. There are 12 poorly drawn books in this series that include comic book characters Supergirl & Batwoman as well as newspaper standards.

As the 8 pager limps on with sporadic releases, the next generation of cartoonists are inspired to challenge the traditional boundaries of accepted taste.

There are possibly 17 books in this lackluster 1960s series 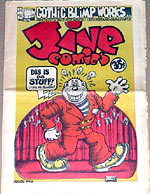 Counterculture newspaper "The East Village Other" hires Vaughn Bode to edit their comic spin-off "The Gothic Blimp Works". Bode, Crumb, Wilson, Speigleman, Deitch, Lynch and other contributors turn out 8 issues. An issue #6, I illegally purchased in times square as a teenager, remains in my archives to this day.

Also In '69, a printer and active comics fan began reprinting high quality 8 pagers from an Ann Street loft in downtown NYC. As a homage, he solicited comic book pros and produced some of the best 8 pagers ever ... all with excellent artwork and solid gags!

Leading the pack in perversion is Little Evie in "Lollipop Lover", a tale of Incest so graphic, just holding it, raises the fear of prosecution. 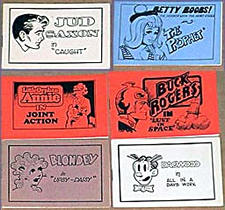 Though Dagwood in "All in a Day's Work" has become popular from it's inclusion in the Adelman book, the rest of these 8 pagers are relatively unknown to most collectors. Betty Boobs in "The Prophet" has the sexiest drawn women to ever grace an 8 pager, and is a must have item. Jud Saxon in "Caught" continues the office shenanigans, Buck Rogers' low gravity sex acrobatics get out of control in "Lust in Space" , LOA takes on Hitler & pals in "Joint Action", while Blondey & Dagwood are forced to fuck for their pet pooch's enjoyment in "Upsy Daisy".

TijuanaBible.org is proud to be publishing new copies of these rare Tijuana Bibles, ... learn more here.

The 1970's Tijuana Bible Re-Discovery and Beyond

As the underground comics movement successfully overcome legal challenges, alternative publishers rise en' masse, reprinting the royalty free, public domain, 8 pagers under the pretext of social enlightenment. Boasting to be the first of these is Socio Library's "Little Dirty Comics" by R.G.Holt.

Harlan Ellison recounts his schoolboy encounter with 8 pagers in " Hot Damn! The Kind Men Like", a review of Socio's book, appearing in "The Staff" Sept 1971.

The most recognized of the 70's books is the 4 volume set "Sex in Comics A History of the Eight Pagers" by Donald H Gilmore PhD. Unfortunately Gilmore's books are filled with obvious inaccuracies and misinformation, His greatest sin is crediting the work of Wesley Morse to a trio of lesbian women, a fallacy that would persist for years. 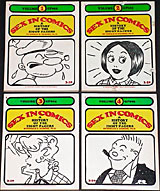 Numerous books reprinting the 8 pagers would come out in this period and follow in later years. With the exception of Adelson's excellent hardcover, they are just easy ways to make a quick buck. One can overlook the usual pseudo text and commentaries as BS filler, but their general failure to find decent source copies is unforgivable.

Though no longer profitable, 8 pagers still pop up, even in the 1980's Ronald Regan, Star Wars and Pee Wee Herman can't escape the wit of subversive artists. Cartoon Illustrator, Wayno, only distributed his "Wee Wee's Playhouse" (1987), to a dozen or so friends.

In 1997, The Eight Pager pokes it's head into the public consciousness again! As the subject of an Abrams Art Book, "Tijuana Bibles: Art and Wit in America's Forbidden Funnies, 1930s-1950s" by Robert Adelman.

The dirty little comics reach a fresh audience hungry for nostalgia and offbeat vintage ephemera. Not just another collection of reprints, with a brilliant introductory essay by Art Spieigelman (read it at Salon.com) this volume is a genuine tribute to the genre, offering quality reproductions of some of the most significant works as well as astute commentary from Richard Merkin. Anyone interested in Tijuana Bibles should have a copy of this book.